Everything You Ever Wanted to Know About the Just Pop In! Twins—But Were Afraid to Ask

Mandy Selke and Carly Swift tell all, from the weirdest thing in their purses to their go-to karaoke songs.
  
By Amy Bartner Mavens November 12, 2019

Just Pop In! owners Mandy Selke and Carly Swift have been interviewed loads of times by local media outlets since opening their popcorn shop in 2003.

It’s easy to see why: The 45-year-old fashionista twins, mothers, and business mavens have bubbly personalities. And of course, they’re impossibly peppy about popcorn. They quite literally live it—and choose to eat it even when they’re not working in one of their two locations—but they aren’t just about kernels and flavorings.

So we set out to learn more about Selke and Swift, and asked them some questions they don’t typically get in interviews (along with some pretty regular questions).

What’s the weirdest thing in your purse right now?

Mandy: Invisible ink. Well, see, when you have kids and they’re tricksters, you have to be prepared.

Carly: I just scurried over to my sister’s house and I left my purse and I’m not sure where it is, so the weirdest thing is not knowing where my purse is right now. (Laughs)

Mandy: It seems like it’s just all about the kids. I wish I had more subscriptions that were cool. At my house right now, it’s Japanese crates, Japanese candy, and Japanese art. That’s the only subscription.

Carly: I don’t anymore, because kids became a priority, gosh darnit. If I’m ordering from Amazon, I’m ordering Dr. Teal’s bath salts in bulk. It’s one thing I do get from Amazon often when I’m too lazy to go to Target.

What’s your earliest memory of popcorn?

Mandy: Popping popcorn on the stove with our grandpa. He would pop popcorn in bacon fat or whatever was leftover. We were like, 4 or 5.

Carly: Oh, yeah, that’s an easy one. We partnered with IndyCar and they wanted it to be called “Burnt Rubber.” It ended up tasting like licorice.

Mandy: That one went to the wayside. (More laughs)

What trait or talent would you steal from the other one?

Carly: Lordy, lordy, lordy. There’s so many things. I would say Mandy’s free spirit of fashion. She’s always broken the barriers and I’ve always been a little more classically dressed.

Mandy: I wish I could steal my sister’s Christmas spirit.

What habit or trait would you change about the other one?

Carly: I would say my sister’s very stubborn.

Mandy: I would say my sister can be wound tightly.

If your life were a musical, what WOULD the name of it be?

Carly: You never know what we’re doing next, for sure.

Mandy: “Are you guys twins?” I think the most annoying one we got one time was, “Who’s the mother and who’s the daughter?”

Carly: And we both yelled, “Don’t tell us who you think the mother is!” Good thing we have a sense of humor because, hell to the no. Wait, I just want to go back to the fact that the one trait that Mandy likes about me is that I have Christmas spirit.

“‘Are you guys twins?’ I think the most annoying one…”

Speaking of annoying twin questions, have you ever pulled a Parent Trap or any crazy antics/tricks on anyone?

Carly: On anyone and everyone.

Mandy: We would always try to switch on our boyfriends, but they always knew.

You are very much part of the buy-and-eat-local movement. What are youR favorite places to buy and eat local?

Mandy: We’re popcorn, but our kernels are from Indiana. We just love supporting our local friends. Sun King, Smoking Goose.

Carly: Mine is between “Stand Back” Steve Nicks, and “I’m Every Woman” by Whitney Houston.

Mandy: I always love “Hella Good” by No Doubt and Gwen Stefani. We sing loud and proud but I don’t know if it’s good. A recap of the Indy Maven Launch Party at CityWay in downtown Indianapolis on Oct. 22, 2019.

Sip and Be Seen at these local bars that perfectly mix a bit of glam with the charm of the midwest. 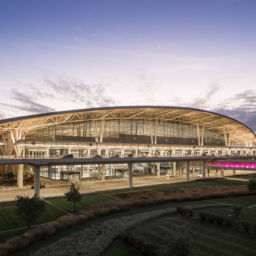 A Maven’s Guide to the Indianapolis International Airport

Exciting changes are afoot at the Indy airport, so whether you’re jetting off on a nonstop to Paris or slogging through another business travel workweek, here’s the inside scoop on where to nosh, sip, and splurge the next time you’re at IND. Local restaurants helped jumpstart Indy’s exciting month of May at this year’s “Rev” event, and we got the scoop on what six amazing women were serving there. The leaves are changing, there’s a chill in the air — fall is finally here, and so is pumpkin spice season. 6 Ways to Satisfy Your Bacon Craving on National Bacon Day

It’s the perfect time to try one of these delicious bacon-centric items.