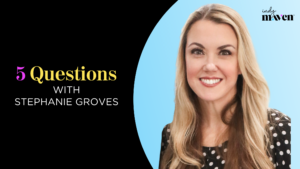 Kristina Mazza, the owner of Hoagies & Hops in Butler Tarkington, was born and raised in Southeast Pennsylvania and moved out to Indy with her husband to be closer to her parents. She ran a local restaurant group for several years until she decided to open a shop that would include the beloved tastes of her hometown that she missed—and that locals have been lining up for ever since.

I caught up with Kristina to find out more about her restaurant, those delicious cheesesteaks, and what exactly a “hoagie” is in the first place.

You have a degree in Restaurant and Hospitality Management from Penn State University, so was it always your plan to own your own restaurant? If so, what inspired you to open Hoagies & Hops?

Growing up going to Atlantic City, New Jersey with my family, I became interested in the casino industry. I first went to school for casino management but later focused on the restaurant industry. I ran several restaurants in Pennsylvania (PA) before moving to Indiana.

I worked for small independent restaurants and enjoyed the ability to use my creativity to help grow their businesses. My husband and I purchased a home in Franklin, Indiana, and decided that Indy was our new home.

After years of bringing PA food out here or having it shipped in from friends and family, I decided to leave a fantastic position as Operations Manager for LUX Restaurants in order to bring the authentic hoagie here.

The best part of my shop is meeting new people. It makes my day when transplants from Pennsylvania, Jersey, and Delaware—or just someone who has never had a real deal cheesesteak or hoagie—come in for their first time. I get to share my story with them or even reminisce about what we miss from back east. They are not just customers, they are my friends!

What’s the thing you think people would find most surprising about your job?

How hard it is to get the ingredients in from the East Coast and the fact that I named every hoagie on the menu to reflect something from my childhood or from those regions.

It takes quite a bit of time and special ordering to be an authentic PA-style shop. I never would have opened my shop if I couldn’t get the rolls shipped in from Philly or South Jersey. Liscio’s Bakery is out of Glassboro, New Jersey, across the river from Philly.

I have seen fights nearly break out in Philly over this question, but I’m asking it anyway: Do you prefer Cheese Whiz or provolone on your cheesesteaks, and why?

I personally enjoy all of them! I enjoy sharp provolone, which is an aged cheese that is served in several sandwich shops in Philly. It takes the steak to a whole new level with great flavor—and adding fried onions and sweet bells is the way to go!

However, customers can’t go wrong with their choice; I only offer the cheeses you will find out in Philly and the burbs.

Where does the word “hoagie” come from?

I love sharing the myths of the hoagie, but the main one goes like this: The most widely accepted story centers on an area of Philadelphia known as “Hog Island,” which was home to a shipyard during World War I. The Italian immigrants working there would bring giant sandwiches made with cold cuts, spices, oil, lettuce, tomatoes, onions, and peppers for their lunches. These workers were nicknamed “hoggies,” and over the years, the name became attached to the sandwiches, just under a different spelling.

What’s the most adventurous sandwich on your menu?

This is a very “PA Dutch” hoagie. PA Dutch refers to German immigrants settling in the state of Pennsylvania during the 18th and 19th centuries. The name “Zerns” refers to the PA Dutch farmers market near my hometown where my dad made cheesesteaks when he was very young.

Stephanie Groves is the Executive Editor of Indy Maven, and she loves all things cheese and bread.