3 Most Popular Languages to Learn in Indiana

Communication comes in all different forms—including languages. Here are the 3 most popular languages to learn in Indiana.
  
By Emma Quasny Culture Featured January 16, 2023

‘Communication is key’ is a phrase often thrown around in everyday life— and it’s true. Communication is at the forefront of the way we express our feelings, thoughts, and emotions to one another, and the beauty of communication is it doesn’t just happen in one language.

A recent study by experts at Writing Tips revealed the most popular languages to learn in Indiana are Spanish, Japanese, and German by analyzing monthly Google searches. On a national level, Spanish takes the crown as the most popular language to learn across the U.S. with a staggering total of 476,900 average monthly searches, as well as taking the top spot in each and every state. In second place is Korean, with 44,090 Google searches, followed closely by Japanese in the third spot with a total monthly search volume of 40,260.

Whether you are looking to learn a new language or want to brush up on a language you already know, read on about the most popular languages to learn and where you can do so in the Indianapolis area.

Spanish is the most popular language to learn in Indiana, according to Google search data. This language takes the top spot on a national level, being spoken by approximately 534 million speakers, as well as being the official language of 21 countries. Almost 13% of the U.S. population speak Spanish too—in fact, it is the second most spoken language in the country. Not to mention, it has the highest number of speakers in the family of romance languages.

German is the third most popular language to learn in Indiana. Around 155 million people speak German, placing it as the 11th most spoken language in the world. It is also the most widely spoken mother language in the EU.

Whether you’re looking to learn a new language in person or virtually, there are a few options to do both. Indy Language Center offers group or private sessions to learn a new language either from the comfort of your home or in person. Lingoda is also another tool that exclusively offers online classes to help you achieve a language win—that moment when you order something without fumbling your words.

Or maybe you are looking for something more laid back and simple— something you can do on the go. The Indianapolis Public Library offers resources such as books and apps that fit into your busy lifestyle.

But maybe you’ve got some extra time on your hands and looking to be more involved in your community. Don’t fret! There are local non-profit organizations where you can volunteer and practice a language while learning more from our immigrant neighbors. Organizations like Immigrant Welcome Center and Exodus Refugee Immigration are places located in downtown Indy that benefit Indy’s immigrant and refugee communities.

RELATED: HOW YOU CAN BE YOUR BEST COMMUNICATOR Everything You Wish You Learned in School

We asked you what you wish you had been taught in school — and we love this crash course you came up with. Hear From Women in Media at Indy Maven’s January Meetup

Join us for an end of year meet up with a holiday marketplace featuring more than 40+ women-owned businesses and makers! 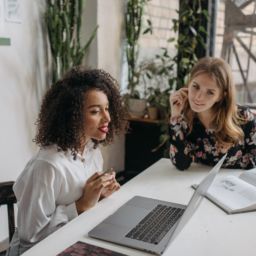 7 Experts Share How You Can Be Your Best Communicator

Whether you need help communicating with your boss or your bestie, read on for seven Indianapolis-area experts’ personal and professional tips on how to be your best communicator. How to Practice Impactful Communication Vulnerability and its Boundaries — at Work

Vulnerability is a strength, not a weakness. Here are a few ways to have vulnerable conversations in the workplace.