“Come on in baby, make yourself at home,” Janet Easley says as she ushers me into her Indianapolis home with a welcoming voice and smile. We haven’t even begun chatting, and I can already see how she’s the community mom, nourishing those around her year after year with her delicious Thanksgiving meals.

If you’ve been in Indianapolis around the holiday time, you might have heard of Janet Easley. Why? Well, she’s been providing Thanksgiving dinners for the less fortunate for over 40 years in an effort to “give back.”

“No matter what we can do, Coronavirus or not, we do. I don’t want my people to go hungry — we have to give them something, anything,” she says.

Even though the COVID-19 pandemic has made it impossible for Easley and longtime friend and co-organizer Bobbie Jones to cook their usual spread and serve sit-down and takeaway dinners at the Watkins Park Family Center as they’ve usually done, the team still insists on handing out frozen turkeys to families in need.

We’re chatting at the end of October when the fall colors have fallen upon Indianapolis, and usually, Easley would be preparing hundreds of sweet potato pies, one of the signatures of her Thanksgiving dinner spread, while arranging for cans of corn and green beans to be bought and figuring out turkey sourcing, a yearly practice. But this year, just like the last two since the onset of the pandemic, she focuses on the large and looming task at hand: turkeys.

She calls a supervisor at Meijer, hoping to strike a deal for about 350 turkeys that will be delivered frozen to her the day before the drive. The rest, she says, will be “donated little miracles.”

“Every year, we wonder how we’re going to do it, but somehow, people show up, offering to donate 10 or 15 turkeys, and we’re able to feed more families that way,” she says.

Of course, everyone will miss her cooking and her expertise, but the drive-by Thanksgiving means that her usuals won’t miss her warm smile and kind words.

It’s not a solo effort, of course — Easley has helpers. From friend Bobbie Jones to close family friend and adopted nephew, Rafael Sánchez from RTV6, as well as hundreds of volunteers from all over, the team will assemble again to hand out turkeys this year, and while she’s sad that she can’t provide more, delivering a Thanksgiving spread complete with sides and stuffing, she says it’s “better than nothing.”

“Each year since COVID-19 began, I keep saying that next year, we’ll be back to normal. I don’t know when that’s going to happen, to be honest, but whenever it does, we’ll be ready. Until then, handing out frozen turkeys is the name of the game,” Easley says.

The need of the hour? Donations.

HOW YOU CAN HELP:

This year, volunteers wearing masks and gloves will be handing out free turkeys outdoors from 9 a.m. until the turkeys are gone on Saturday, Nov. 19, at the Watkins Park Family Center, 2360 Dr. Martin Luther King Jr. St. It will be *drive-up only* with one turkey per car.

RELATED: ‘EVERY YEAR IT’S A MIRACLE’ ‘Every Year It’s a Miracle’

We caught up with Janet Easley to see how she’s adjusted her 2020 Thanksgiving plans, which usually involve a free dinner for 10,000 guests at the Watkins Family Center in Indianapolis. ‘Tis the Season to Be Grateful

We asked Indy women what they’re giving thanks for today. Talking all things sugary this holiday season with Carrie Abbott of Newfangled Confections. From massages to meditation, here are simple methods to relieve your seasonally-induced anxiety. 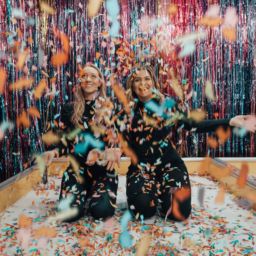 5 Unique Girls Night Out Ideas for the Holidays

Going out for drinks with girlfriends is great—but sometimes you need to shake things up. Try one of these fun ideas for a girls night out to remember. Why I Didn’t Announce My Family Had COVID-19

One woman shares her experience with re-entering society after she and her husband (thankfully) recovered from the coronavirus. “Because not only is the pandemic still very much a thing, it’s by all measurable stats worse than it was when we first locked down in March.” Our editor-in-chief shares her very unscientific predictions about what items will sell out this fall and winter COVID-19 pandemic season. One woman’s story of the lingering effects of her presumed COVID-19 diagnosis and how she found support by talking to others who shared similar experiences. Persistent in Progress: A Timeline of Silver in the City’s Dedication to Social Justice

Silver in the City has advocated for social justice causes since opening in 2000. Explore how the motivations behind the organization’s new Silver Linings Fund came to be. It’s never too early to start holiday shopping, so here are six fun events where you can begin checking everyone off your gift list. From rare spun iron cookware to elegant olive oil dispensers, here are five local gifts from Indiana-area businesses for the foodie in your life. Pamper your loved ones—or yourself—with one of these beauty and grooming gifts from local Indiana-area companies.