Kusama, LSD, Sex With Nixon: What the FAQ is Really Going on Here?

Everything you need to know about the latest buzzy installation in Indy.
  
By Sarah Bahr Culture October 3, 2019

Three Instagram Stories. One and a half Final Jeopardy questions. One Oscar speech. That’s about the length of time each pair of visitors will have inside Japanese artist Yayoi Kusama’s elevator-sized Infinity Mirror Room, a black-and-yellow polka-dotted pumpkin extravaganza debuting at the inaugural “Harvest” festival at the Indianapolis Museum of Art at Newfields on October 4.

The room’s 45-second limit isn’t just because of the anticipated crowds—it’s on the orders of the artist herself. No visitor has spent more than 60 seconds at a time inside All the Eternal Love I Have for the Pumpkins since Kusama created the room in 2016, which is an intriguing enough fact on its own.

Here’s what you should know about the fascinating woman behind the glut of glowing gourds you’ll be seeing all over your Instagram feed this fall.

Q: Why so many pumpkins?

A: As Robert Indiana once said of his friend Andy Warhol: “The reason he painted soup cans is that he liked soup.” Kusama’s family cultivated seeds in Japan during her childhood, and her polka-dotted pumpkins are based on the Japanese kabocha squash—which looks like a pumpkin-shaped watermelon. The second part of her rationale is way trippier, though: psychedelic hallucinations.

A: The 90-year-old Kusama has experienced hallucinations since childhood in which fields of dots come to life and swallow her whole. Polka-dotted pumpkins have appeared in dozens of her pieces ever since the woman the Japanese media has christened the “princess of polka dots” created her first Infinity Mirror Room in 1965, waaaaay before Instagram was a thing.

Q: Is she still hallucinating?

A: Kusama checked herself into a mental hospital in Tokyo after a breakdown in 1977 and has lived there by choice ever since. (Her studio is a short walk away.)

Q: Wait, did you say the newest Instagram queen is 90?

A: That’s right. And probably cooler than you were — or are — or will be — at 20, 30, 50, or beyond. She’s the world’s top-selling living female artist, and single work of hers can command more than $7 million at auction. She also claims to have performed the first same-sex marriage in the United States during a “happening” in New York in 1968, and her Infinity Mirror Rooms have been featured in an Adele video and Instagrammed by pop star Katy Perry.

Q: Did she really offer to have sex with Richard Nixon if he’d end the Vietnam War?

A: Andy Warhol, for one. Kusama filled a rowboat with cloth penises and wallpapered a New York gallery with identical photocopies of it in 1963—three years before Warhol staged a show half a mile away featuring repeated pink-and-yellow screenprints of a cow. American sculptor Claes Oldenburg and Greek mixed-media artist Lucas Samaras also created pieces remarkably similar to Kusama’s shortly after she unveiled hers. (Kusama’s phallic couch predated Oldenburg’s “soft sculptures” of objects ranging from a baked potato to a toilet.)

Q: Is 45 seconds really enough time to take in all those pumpkins?

A: Researchers say the average visitor spends between 15 and 30 seconds looking at a work of art, so you’ll still be coming out ahead. But, for the record, there’s no rule against a repeat visit the next day.

Q: That room looks like it’d be trippy to stroll through on LSD…

A: Don’t even think about it.

How to see “All the Eternal Love I Have for the Pumpkins”: A timed ticket is included in the price of admission to Newfields’ Harvest festival this weekend. If you visit after that, the exhibit is included with museum admission (the room will be at Newfields through March). You can reserve a time in advance at https://discovernewfields.org/calendar/infinitely-kusama The Executive Director of the Latinas Welding Guild and functional artist shares how she helps women make headway in a male-dominated field. 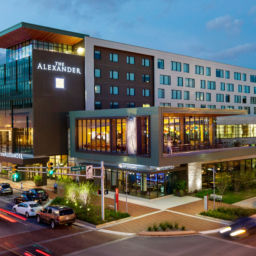 Her show at the CityWay Gallery is supposed to run through June—so why not learn about her work now while you’re stuck at home?

Boarded up windows are becoming works of art—and statements of support for the Black Lives Matter movements and protests. The Arts Council of Indianapolis is putting on a free virtual benefit is with all donations going toward local artists. Liven up your feed with the beautiful creations from these talented women. Meet the Woman Behind Internationally Known Kuaba Gallery in Carmel

Jayne During likes to fly by the seat of her pants to find new, diverse art to introduce to the community. The saleswoman-turned-muralist talks community engagement, big upcoming projects, and life as an artist. Discover the Art of Carole Wantz at the Indiana State Museum

At the age of 80, the former resident of Columbus, Indiana is now headlining her very first museum exhibition. We simply love to see it. Former attorney and lifelong art lover Rhonda Long-Sharp and her talented team created an Indianapolis (and global) art institution. Find out how and what’s next for the gallery. Hint: It involves Andy Warhol. Your Guide to Art in Indy

From murals to galleries, Indy is home to so much great work you’re sure to love. How One Woman is Helping Cancer Patients Express Themselves

Indianapolis-area textile artist and fashion designer Emily Gartner is teaching local cancer patients to design their own headscarves through a unique art project. An artist and certified life coach, Taylor Bamgbose focuses her efforts on supporting women and their mental well-being. In Indiana by way of Texas, Dr. Colette Pierce Burnette is the new President and CEO of Newfields — and she is fully embracing her new role.