“My physical presentation does not match any kind of stereotype that people might have about what kind of person should be doing this job.”
  
By Lisa Renze-Rhodes Career + Finance Mavens November 27, 2019

“How’d You Get That Job?” is an Indy Maven series where we chat with women who have some of the most unique and fascinating jobs you’ve ever heard of.

As the excavation and sales lead manager at Hope Plumbing, Kate Sullivan heads a team of nearly a dozen professionals who customers turn to when their sewer systems break—a job some might find a bit unexpected for a woman. But she thinks it’s perfect for her.

Sullivan studied tourism, convention and event management at IUPUI before spending a couple of years as an event planner. But, she decided she wanted a new challenge that would also provide a more reliable schedule. Turns out, managing yard excavations is surprisingly similar to orchestrating a large event—you need to stay organized, communicate, and listen to people’s needs. Then, you have to deliver the goods. And if you can weather challenging moments with “ease and grace,” she said, you’ll carve a path that’s right for you.

What did you know about the job when you started?

(Laughs.) Nothing! On my first day (as a customer service representative), people were calling and saying they have this problem, and I’m on the phone, like, ‘Okay…’ I was just writing down everything they said, hoping that it would make sense to somebody.

Because I hate not knowing things and I don’t like feeling that somebody is trying to dumb things down to explain things to me, I went online and printed off common plumbing terms and studied them. I paid attention to what the customers were saying, and as I was inputting invoices, I would read what they said to help cultivate that working knowledge of the job.

We joke that I could probably diagnose what’s going on in a house by just talking to somebody over the phone.

“If you want to go into a path that’s not female-driven, being able to take a hit or two with ease and grace will help.”

You’ve been doing this now for almost five years. Do you still get “looks” when people find out you work for a plumbing company?

One hundred percent, yes. We just went to training to formulate our business plan for the year, and someone from one of the other local companies was asking, “Who runs your excavation department?” And Jack (Hope) one of the owners, quickly pointed out, ‘Katie does.’ And you could see the guy was kind of taken aback, processing like, ‘Oh, ok, cool…’ I get these weird looks, like it doesn’t compute, because I’m a petite girl. I love fashion. I love makeup. I’m a girly girl.

But also, my dad’s an electrician and growing up, he would have me be an electrician’s apprentice in the summer. So I’m a girly girl, but I’m also not afraid to work and get dirty.

I’m excited that I’m changing someone’s perception of what this job should be.

If you want to go into a path that’s not female-driven, being able to take a hit or two with ease and grace will help.

My goal is not to stop at excavation manager. I’d love to move up to the general manager or to the controller—a visionary position in the company one day to help it grow.

Lisa Renze-Rhodes is a freelance writer in Indianapolis. How’d You Get That Job?: Jess West, Costume Designer

“How’d You Get That Job?” is a new series we’re kicking off at Indy Maven where we chat with women who have some of the most unique and fascinating jobs you’ve ever heard of. 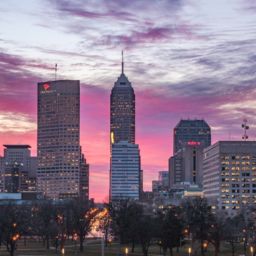 How’d You Get That Job?: Rachael Heffner, Bodybuilder and Director of Operations for ARC Fitness

She went from weighing 300 pounds to winning Miss Indiana Physique—and we needed to know everything. How’d You Get That Job?: Shauta Marsh, Co-Founder of Big Car Collaborative

The curator, writer, author, and researcher shares how she made her vision in the arts a reality. Laid Off. Laid On. Lessons Learned a Year After Losing My Journalism Job

Even in the darkest days after losing a job, there are so many ways to make sure you keep moving forward. Inside the Mind of a Maven: November Edition

We’re picking the brains of Indy Mavens with a new question each month to help us all get to know each other better. Sh!t You Should Know: Hope Plumbing The Masks We Wear and Honoring Who’s Behind Them

How can we, as women, make sure we don’t lose ourselves as we try to be so many things to so many people? We’ve got great tips that can even end up saving you money too. Your Guide to Career Resources in Indianapolis

These resources can help you find a career you’re passionate about and land the job of your dreams. Your dream career is out there. Set a vision and take action—here are some inspirational tips from an executive and leadership coach to start you on the path to success. How to Winterize Your Home With Hope Plumbing

Frozen pipes can be a BIG, expensive problem, so to avoid having to deal with that hassle, here are some smart, easy tips from Kate Sullivan of Hope Plumbing about winterizing your home. Four Things You Need to Know Before Starting Your Own Business

Going solo may sound like a dream, but your journey to entrepreneurship can be riddled with risks. Hone in on your “why,” and get tips from a pro, before you update your LinkedIn profile with your next pursuit. Thinking of Going Remote? Here’s How to Compete With Global Talent

Remote work brings with it seemingly endless opportunities. But along with it, comes global competition. Here’s how to stand out according to the HR Guru, Kristen Lampkin. Here’s how to write a resume that will actually get you hired.